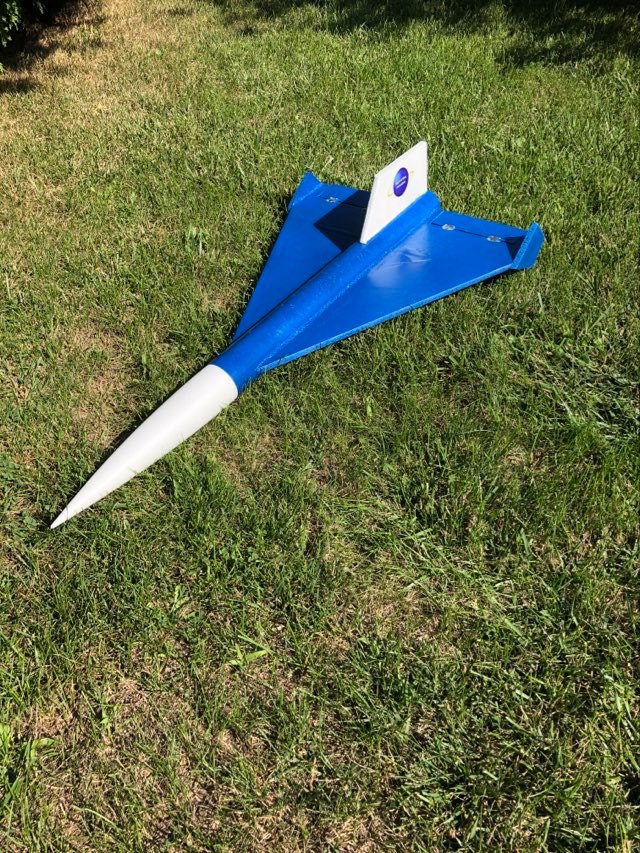 The body tube (BT-80) was glassed with 1-ply of BID cloth and covered with peel ply. Paper templates were made for the delta wings, winglets, vertical stabilizer and ventral fin and then layed out on 3/8″ foam.

The peel ply was removed from the body tube and the glass ends were trimmed and sanded flush with the ends of the tube. A fin tool was used to mark the locations on the body tube where the wings, ventral fin and vertical stabilizer are located.

The rail buttons were located, drilled, and installed.

The BT80 x 24mm Engine Mount was assembled and installed.

The first side of the wings, winglets, vertical stabilizer, and ventral fin were glassed with 1-ply BID cloth (at 45deg to airflow) and covered with peel ply.

Glassed the 2nd side of the rocket parts with 1 layer of BID cloth at 45 degrees and covered with peel ply.

Cutting out the fiberglass delta wings, winglets. vertical stabilizer and the ventral fin. A rocket plane is starting to take shape!

Cut out the elevons then added the horns for the servo rod connections and hinged the elevons in place.

Used 5-min epoxy to tack the winglets to the wings and the vertical stabilizer and the ventral fin to the body tube.

Once the flox cured, the flox corners were sanded, dust vacuumed and primer was added to the rocket plane.

Now that the rocket plane body is complete, the servo motor control for the elevons is installed, configured, and tested.

Visit the Beyond Blue Shop