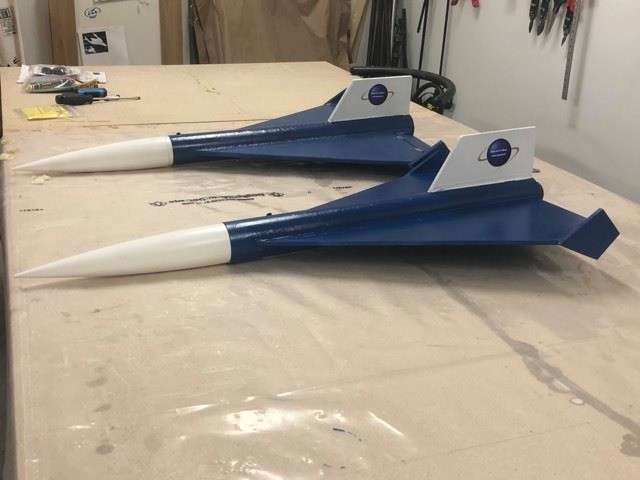 The Blue Dart Delta II is a fiberglass rocket plane. It will launch on a G80-7T Rocket Motor. This is the 2nd Delta II constructed. The initial build was a rocket glider version whereas this one lands like a typical rocket using a parachute. Both will gather flight data to aid in Blue Dart Delta III design refinement.

Assembled the motor mount including a retainer. Trial fit with a used 29mm G motor.

A layer of BID cloth was cut at 45deg to fit over the 1/4″ foam, then a piece of peel ply was cut to cover the layup.

A batch of expoxy was mixed along with a small batch of micro.

Glassed the first side of the wings, winglets, vertical stabilizer, and landing pad with one layer of BID cloth. The layup was covered with peel ply so the parts come out smooth after cure.

Removed the peel ply and trimmed the edges.

Glassed the 2nd side of the Blue Dart Delta II wings, winglets, vertical stabilizer, and landing pad. Covered the layup with peel ply.

Installed an eye bolt in the front section of the motor mount as an anchor point for the shock cord.

Glassing the body tube with one layer of BID cloth and covering it with peel ply.

Removed the peel ply, trimmed the ends, and sanded the body tube.

Installed the rail buttons and the motor mount.

Tacking the components onto the body tube and adding epoxy fillets.

Install parachute and attach shock cord to the nose cone.